We Need Not to Admit Defeat

We peer down into a stadium filled to the brink. Two men in suits are standing up to get a better view of the playing field. There is no match scheduled, yet people seem tense. There are a few figures standing in the arena, but all attention is focused on the trees behind. In the middle of the sports ground, a forest stands tall. The title of this drawing by Max Peintner, “The Unending Attraction of Nature”, seems to tell us that the spectators have paid admission to look at the trees. Looking toward the skyscrapers on the horizon, it appears that this little wood is the last remnant of vegetation amongst the concrete jungle of the metropolis. 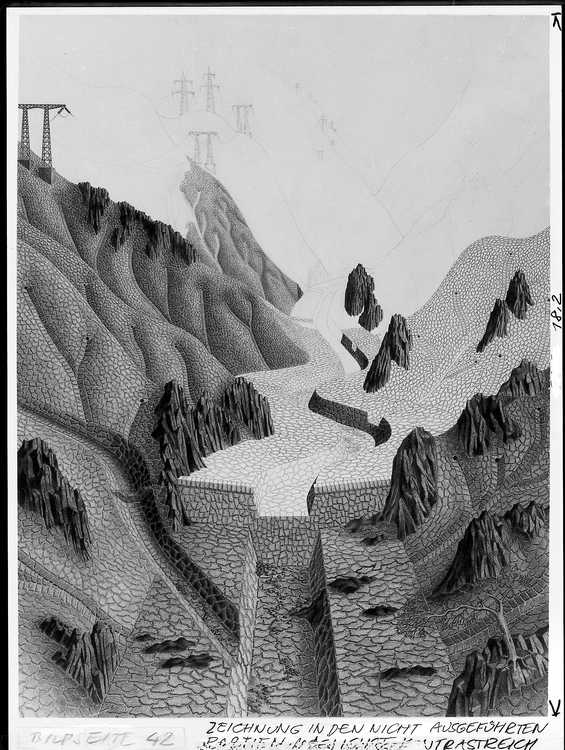 “I never considered that my drawing might become reality,” says Max Peintner in an interview, about the idea he put on paper in 1970/71. Undoubtedly, it is owed to the fine humour of his drawing that it has been reproduced in school textbooks in many countries over the years. The threat to nature is taught not didactically with a raised finger, but with a figure of thought: Imagine if the forest only existed as an exhibition piece! The artist was far ahead of his time with this fictitious idea, but the subject of forest decline and the related problems were not discussed widely until the 1980s.

In the boom years of the post-war period, roads were built industriously, cars were sold; only slowly did the realisation that exhaust gases have a harmful effect start to come to light. In 1969 - the year of the moon landing - Peintner published his first futuristic drawings. His magazine, which he published himself, was titled “Six contributions to the future. Critique of technology and civilisation under the guise of utopia.” With his precise, realistic style, the drawings address the state of modern media society, which perceives landscapes only from car windows or screens. 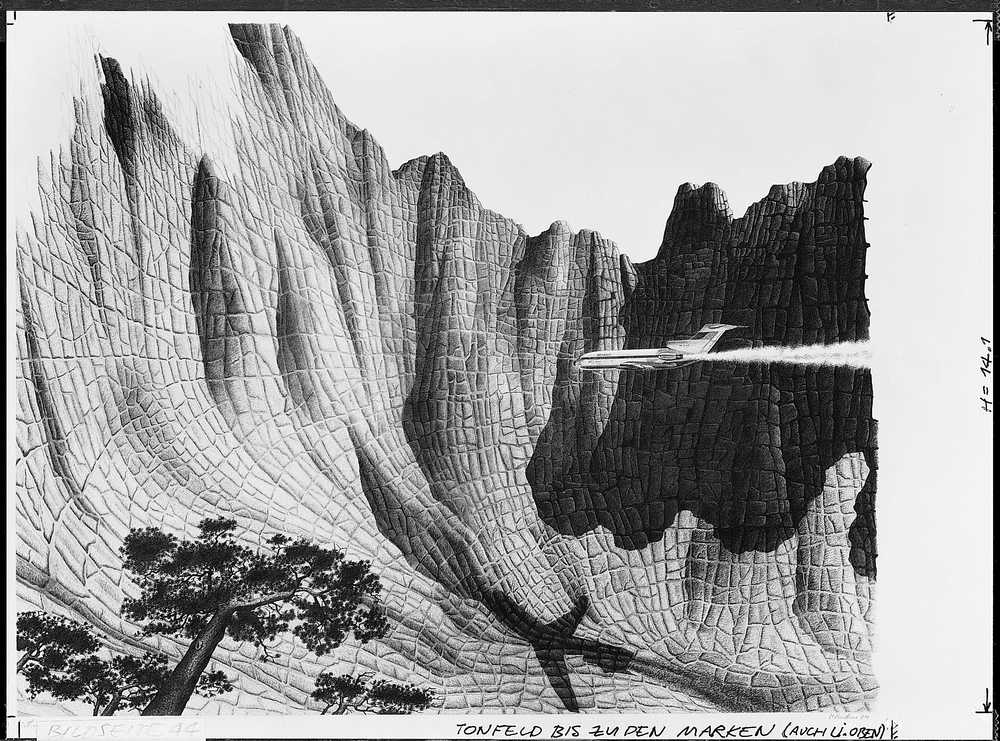 With his design “Autobett” (automobile bed), Peintner devised a bedroom, on the wall of which the view through a windshield is projected. The users of this medially pimped piece of furniture are supposed to enjoy watching skyscrapers passing by on the urban highway, whilst lying in bed. If the irony of this design is not obvious enough, Peintner’s subtitle definitely makes it clear: “Accompanied by noise and vibration. Film speed controlled by accelerator, use left pedals to switch to overtaking mode.”

Peintner’s early works on paper concern the utopian architectures which occupied his Viennese companions Walter Pichler and Hans Hollein at the time. In 1963, at the Galerie nächst St. Stephan, his colleagues presented designs of monumental city models and bunker buildings that were reminiscent of science fiction. Peintner, the son of a master carpenter, had studied architecture at the Academy of Fine Arts, although the relationship of construction and landscapes was more interesting to him than any concept of revolutionary architecture. This is visible, for example, in his satirical piece called “Moveable hills and artificial clouds for the enlivenment of monotonous car journeys.” He pushes alienation of the natural environment to the extreme, turning landscapes and celestial phenomena into a backdrop which can be mobilised according to entertainment needs.

Peintner moved to New York in his early thirties and often read American science magazines, such as Discover or Scientific American. He earned his living working as a commercial graphic designer, and would borrow set pieces from these advertisements to use in his own drawings. The influence of American consumer culture is reflected in quite a number of his works. In his drawing “The obscuration of America by stationary Chinese satellite continents. Initial phase. View of the Californian coastline,” he made use of a pair of attractive sailors from a Coca Cola advertisement. Like the colossal spaceship in the science fiction film “Independence Day” (1996), a plate structure slides across the Pacific. 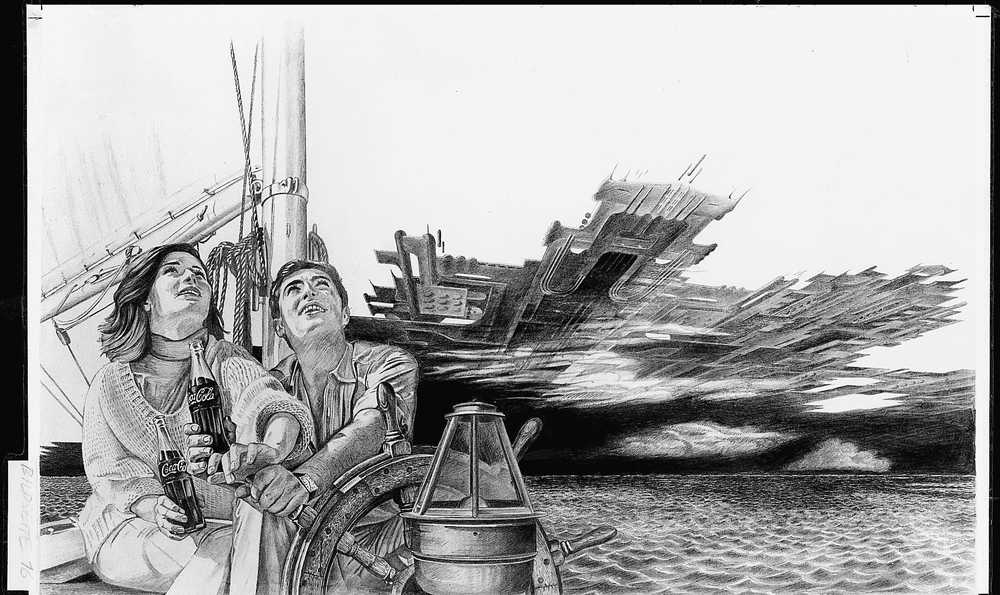 The obscuration of America, 1970

Oblivious to the danger behind them, the characters continue to sip their lemonade and look ahead optimistically. The fact that Peintner’s “satellite continent” was of Chinese origin, of all places, makes his nearly fifty-year-old drawing seem more relevant than ever: China has long been in the overtaking lane in respect to the West, both economically and technologically.

Discussing his early works, many of them were simply “corny jokes”, says Peintner. By 1969, though, the artist was already aware of the effectiveness of his deliberately poor jokes, and so he sent them to leading media companies. To his surprise, the Süddeutsche Zeitung seized the opportunity to display his snappy humour, and wrote a full-page article about the young Tyrolean living in Vienna. This was somewhat of a “cold start” for Peintner, which subsequently led to his being invited to exhibitions by the Kunsthalle Baden-Baden and the Kunsthalle Kiel. In 1977, his work was also displayed at documenta 6 in Kassel.

Despite all of the sarcasm, Peintner’s early works also possess an underlying dark element. One drawing of his titled “Mein eigener Fesselgrab” - implying his own grave - depicts a water basin in which an elongated balloon is tied down with ropes. The capsule, floating at the surface, is inscribed with the artist’s name and birthday—the date of death is yet unwritten. Another picture of his, which translates to “Family grave as provisional swimming pool”, is particularly macabre: Two bathers are positioned in front of a swimming pool with a gravestone, the cross is reflected in the water. 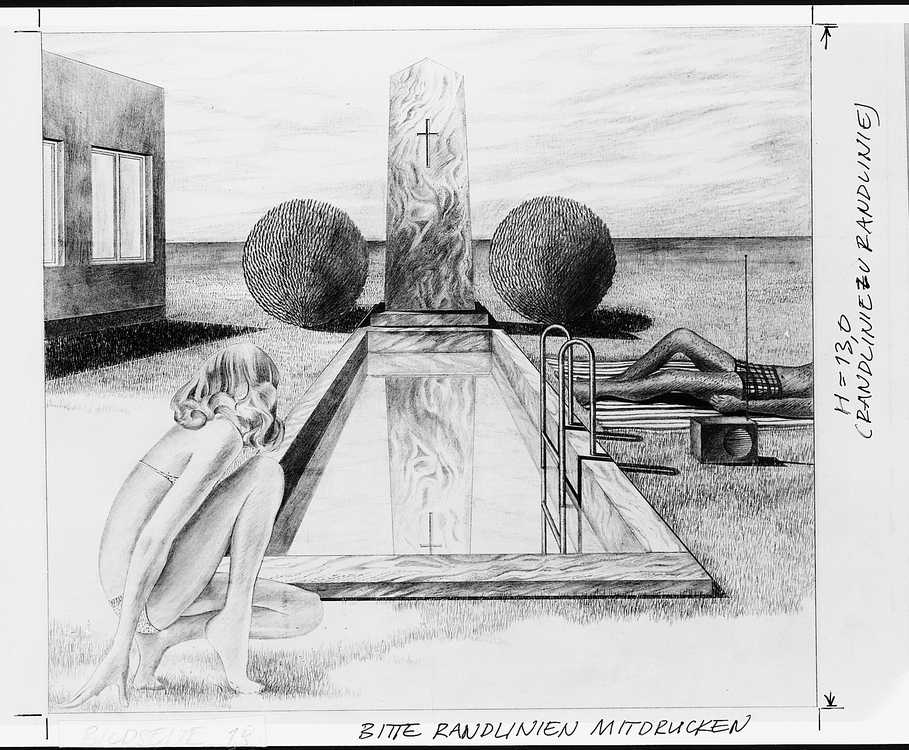 Will these sun worshippers swim here till death do them part? An even more cynical piece of pencilwork is “Motorway graves”, which consists of a motorway leading to the horizon, with crosses marked on the asphalt in white paint, including names and biographical data of the deceased. Perhaps a memento of accident victims? The title seems rather to implicate that this is a cemetery designed for a speedy visit.

For Peintner, though, death has another face: exploited, barren, concreted land which was once nature, no longer possess any life. His drawing “A totally regulated valley” (“Subdue the Earth”) makes the graduate civil engineer’s critical impetus particularly clear. Instead of overgrown slopes, we see paved surfaces, covering the mountain valley like scales. In place of trees, there are electricity pylons reaching up into the sky. Another drawing, the panorama “garden”, is quite the contrary to its title, featuring no plants but simply a dried up, stony riverbed. When Peintner includes water in his pictures, it flows only down concreted barrages.

As an avid mountaineer and white water kayaker, his sense of alpine landscapes is undoubtedly sharpened. “Back then, we were all on this morbid trip”, replies the 80-year-old artist when questioned why death plays such an important role in so many of his works. His generation was influenced greatly by the Cold War and the nuclear arms race. This threat of nuclear force soon moved closer physically, too, in the form of nuclear power plants. When the nuclear plant in Zwentendorf was due to undergo trial operation in 1978, the artist teamed up with friends to protest it. They put up posters, which they made only several days before the national referendum on 5th November, with the caption “Zwentendorf: Es ist fünf vor zwölf” which translates to “Zwentendorf: The Eleventh Hour”. Peintner’s drawing “Noon”, of an aeroplane about to crash into a mountain face, was used as the illustration. 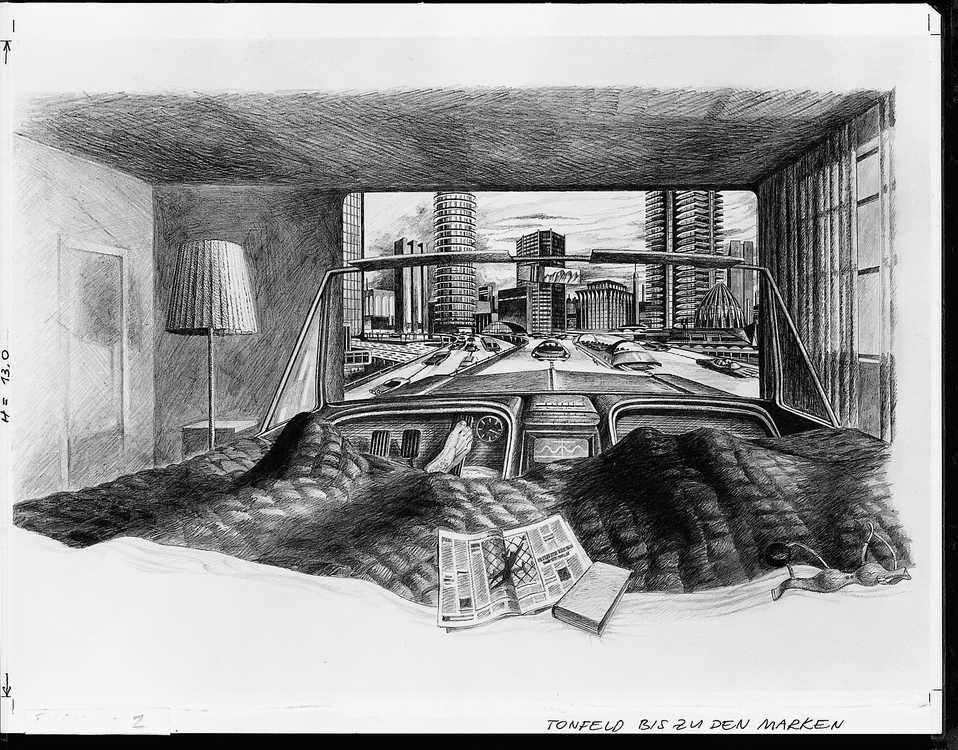 “Max was a passionate opponent of Zwentendorf”, recollects art academy professor Christian Reder, who organised the protest with Peintner. “We put up posters around the central cemetery too, because it was All Saints’ Day the next day and people would be visiting the graves”, Peintner tells us. Shortly, however, the police arrived and removed the posters. For Reder, demonstrating resistance to the Zwentendorf nuclear plant, which was eventually rejected by 50.47 percent in the referendum, was an important sign of civil society’s life.

“Intellectually, we were precursors of the Greens”, he says about the ecological awareness which was rising at the time. From 1982 onwards, the project manager and cultural journalist helped develop the Viennese city newspaper, Falter. In the liberal left-wing weekly magazine, sociopolitical debates were fought, but art was given plenty of space, too. When the editorial staff decided to publish works of art on the front cover in 1982, one cover featured a piece by Peintner.

“The idea was to bring the artistic image into public space”, explains Falter founder Armin Thurnher, who turned newspaper kiosks into exhibition spaces in doing so.

At the time, the Viennese art scene was very limited, recalls Reder. They would meet in no more than three or four pubs, to talk about anything and everything. The artists who were making things happen, like Peintner, were almost all “foreign”—only very few came from the local bourgeoisie. There was no domestic art market, seeing as commercial galleries did not open until the mid 1980s, so artists had lots of space and freedom. Peintner was known not only for his drawings, but also for the important monograph “Otto Wagner 1841-1918. The Expanding City: The Beginning of Modern Architecture”, which he had published with Heinz Geretsegger in 1964. The clique around Walter Pichler and architect Raimund Abraham, to which Peintner also belonged, was dubbed the “English Fleet” because of the elegant suits they wore. One photo portrait shows the 30-year-old artist dressed stylishly, not a trace of the Tyrolean nature boy or rebellious Bohemian to be seen. 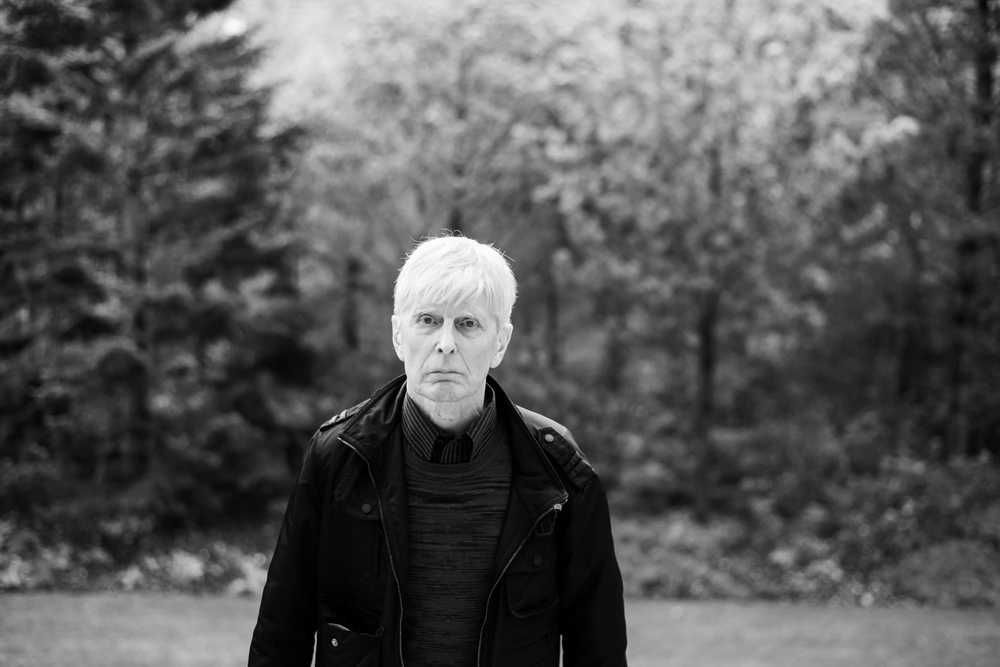 Max Peintner at the Opening of FOR FOREST

“To me, it is visionary that Peintner dedicated himself to ecological questions so early and so much”, emphasises Falter editor Thurnher, who praises his drawings as “technocritical icons”. In the summer of 1984, they went on a long hike through the floodplains, the Hainburger Au, to view the site at which a hydropower station was to be erected.

Peintner was utterly outraged by the plans to build in this natural river landscape. “My friend Walter Pichler had told me, after a family outing the to floodplains, that jet fighters were practicing there,” he says about the time when the problem first came to his attention. In the winter of 1982/83, environmental association WWF Austria launched their campaign “Save the Floodplains”. Several months later, Peintner published an article in which he reflected on the reason for the clash of civilisation and nature.

Starting in the late 1970s, writing played an important role in the artist’s oeuvre, whereby his images and texts functioned independently of each other. His poetical, philosophical style distanced him from any environmental propaganda. Peintner was concerned with the basic principles, which he encircled with his connotations. In December 1984, the Hainburg issue escalated disastrously. 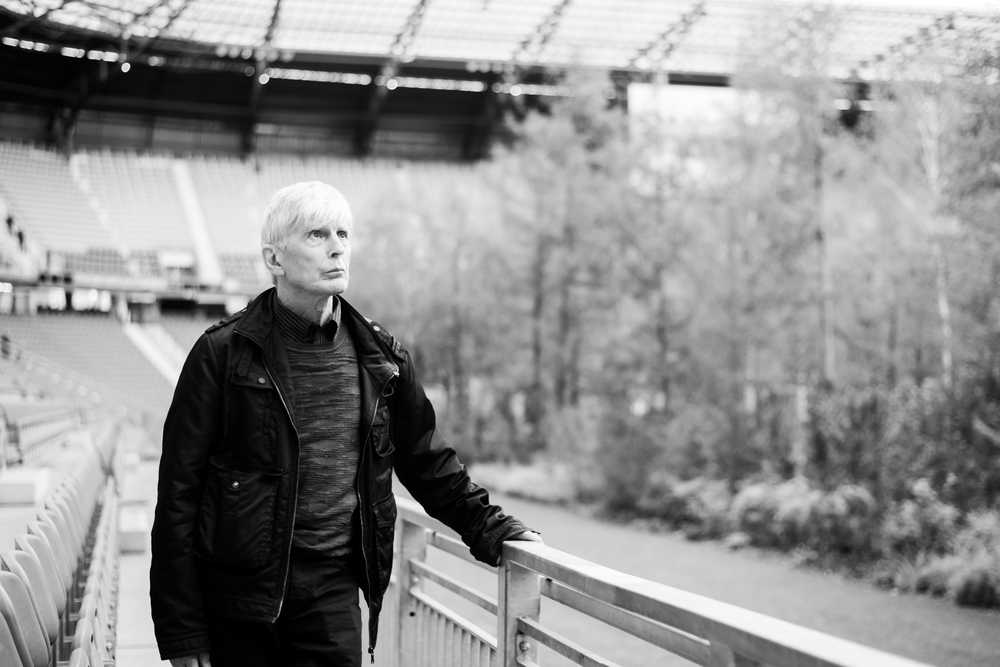